The Stingers men’s rugby team has done it again, defending their title against McGill on Nov. 9 to take their third consecutive Reseau du sport étudiant du Québec championship win by a score of 38-19.

“It’s never been done before as far as you can see in the RSEQ stats, so it really is special,” said head coach Craig Beemer after the game. “It’s difficult to keep the standard that high, but then again when you get to reflect and if you could actually see how good my coaching staff is […], it’s pretty incredible to see how many people are here behind the scenes making it work.”

Going into this matchup, Concordia knew that they had a tough game waiting for them. Their regular season matchup against McGill was their tightest win all season. They beat out their opponent 23-21, but the game could have gone either way.

To start Saturday’s game, it looked much the same. Concordia has a tendency to start slow and from the way they played out the first ten or so minutes, it truly looked as though this final could go either way.

But in true Stingers fashion, it did not take long for the home team to warm up and find their groove. Better passes and cleaner rucks made for a much easier time on offence, and the team took that momentum and ran with it.

“Our forwards played really well and stuck to what we were good at,” said rookie Aidan McMullan, “We followed the game plan and momentum came and we just kept on going.”

With the Stingers up 7-0 about 25 minutes in, McGill’s starting hooker was shown the yellow card, a mistake he would surely come to regret. Concordia used this to their advantage, scoring not one but two tries during their 10 minute man advantage. 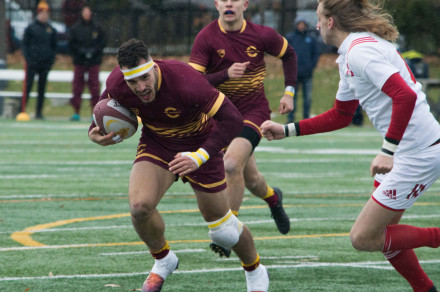 The Stingers went into halftime up 21-0 over McGill and from that point, it would be a battle for their opponents to come back from this deficit.

As the second half picked up, graduating Stinger Dylan Macdonald put his team even further ahead with his second try of the game. McGill quickly turned the play around, pushing the Stingers back on their try line. Concordia’s defence held strong for several minutes before finally being broken by the McGill offence.

McGill scored another shortly after, inching closer to a comeback, one that the Stingers simply wouldn’t allow. One penalty kick and one more try brought their lead up to 38-14.

Despite the biting cold, injuries and exhaustion, the Stingers and McGill both left it all out on the field. Tensions were running high and at times got the best of each team. Things got particularly feisty, with fists flying as McGill managed one more offensive play, scoring a try with no conversion. But ultimately, as the clock ran down, it’s the Stingers that emerged victorious.

With a third consecutive RSEQ championship under their belt, and the feeling of being undefeated in the league three years running, the Stingers are on top of the world.

“We fought hard, McGill came back hard on us and we were able to hold on, it was good.” said Macdonald after all was said and done.

Head coach Craig Beemer says that, while this kind of record reflects well on his tenure as coach, on the program and on the university, one hundred per cent of the credit should be given to the players themselves.

“Sometimes I don’t feel like I have to do too much with how it’s gone because of the fact that the players are so accountable and so aware of what we’re trying to do here,” said Beemer. “They really push themselves, they hold each other accountable and really make sure we do things the right way.”

For Beemer, the championship is just the icing on the cake, looking back at what he calls “the journey.”

“If you could just be there from the beginning of training camp and watch and just see these men grow and the stuff they’re willing to put in,” he said. “Now when you want to look back and see who won, it’s going to be Concordia but the day-to-day and the journey that got us here is really what’s kind of special.” 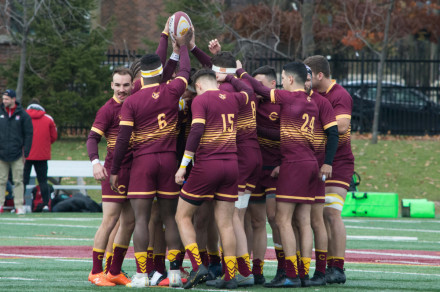 The Stingers will now attempt to claim the ultimate prize this season in winning Nationals. Photo Dustin Kagan-Fleming

With the provincial title safe in their possession for one more year, the Stingers now turn their attention to a whole other beast; the Canadian University Men’s Rugby Championship.

After a gruelling postseason, Beemer will be giving his players some much needed time off before it’s back to work preparing for the national tournament.

This year is the tournament’s third edition, and the Stingers have participated in the two previous years. Their first trip to nationals was short and sweet, getting beat out by the University of British Columbia Thunderbirds and McMaster. Last year was a better showing, with the Stingers leaving Victoria with fourth place. This year, they’ll look to medal at home.

“We’ve already got everything that we need kind of in place, now we just want to get everyone as healthy as possible and deal with the weather, so we’ll be outside training Wednesday, Thursday, Friday and the following week,” said Beemer. “Nothing changes, I think teams get into trouble when they go somewhere different and they try and do different things. We are who we are and we know what our strengths and weaknesses are.”

The Stingers will kick off their tournament at Concordia Stadium on Wednesday Nov. 20 in the 6 p.m quarterfinal. So far, all but one conference has its representatives locked in.

Out of the West, we’ll see two-time national champion UBC Thunderbirds joined by the Victoria Vikes. Ontario will be sending the tournament’s 2020 host, Queen’s University, along with Guelph and Brock.

Quebec has Concordia and McGill, leaving the potential for a rematch of the RSEQ final at some point. Finally, the Maritimes will be sending the winner of University of New Brunswick vs. Dalhousie which will be decided on Sunday afternoon.

With files from Dustin Kagan-Fleming